Jameis Winston is the NFL’s most risk-reward free agent 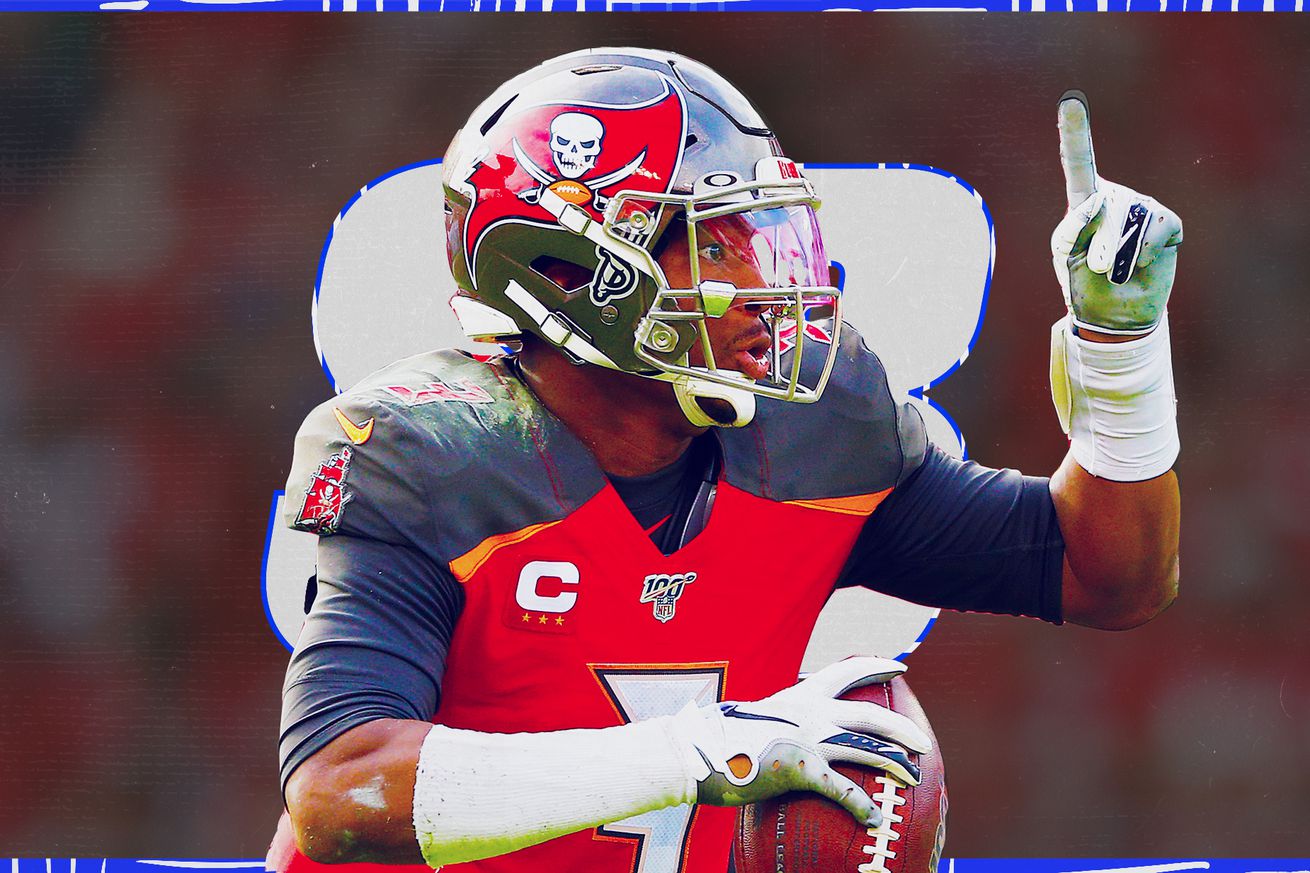 Jameis Winston became a free agent for the first time in his career in 2020.
Jameis Winston is an occasionally stellar quarterback. And, much more often, entirely frustrating.

The 2020 free agent market has been picked over. Players like Tom Brady, Philip Rivers, and Marcus Mariota all changed locations. Teams in need of veteran quarterback help have, for the most part, either found their new starters or made their intentions clear about turning to the draft for help.

But there’s one man out there who could still be the solution to some team’s problems. Or possibly the catalyst that blows everything up.

Jameis Winston forged an uneven path through his five-year NFL career. He’s shown the chops to will his team to comeback victories in wildfire shootouts, or blow a hole in his own boat with awful decisions. Winston has long persisted as the NFL’s Hellraiser puzzle box. If you can figure out how to unlock him, you’re in for a world of delight. As he showed the Buccaneers time and time again, those pleasures are mostly reserved for sadists.

Over the course of 72 NFL games, Winston has thrown 88 interceptions and fumbled 50 times. He’s won more than seven games as a starter only once in five seasons. He’s never been to the playoffs.

He’s also the same quarterback who’s thrown for at least three touchdowns in more than 21 percent of his starts (15 of 70). He’s recorded a single-game passer rating of 103 or better 27 times. He led the Buccaneers to 11 game-winning drives since 2015 — more than Tom Brady, Philip Rivers, or Ben Roethlisberger in the same span.

That’s a lot of variance! So what can the NFL expect from a player who wears his flaws on the outside but may still have potential yet as a franchise quarterback?

The case for: Jameis Winston, high-impact passer in a spread offense


There’s a reason Winston was the top pick in 2015 and why Tampa decided to roll with him rather than re-sign Ryan Fitzpatrick following the 2018 season. At his best, Winston is a fearless passer capable of fitting the ball into tight windows thanks to one of the league’s strongest arms. He’s finished either first or second in average throw distance in four of his five seasons. Despite this increased degree of difficulty, he’s still completed more than 61 percent of his passes.

While his 2019 was more notable for his exclusive entry into the 30-touchdown, 30-interception club, he also threw more deep passes (20+) yards than anyone in the league and completed more than 37 percent of them (38 of 102). Aaron Rodgers, who finished second in that category, completed only 28 of his 88 deep balls (31.8 percent).

Sure, Winston’s prowess was helped by the receiving tandem of Mike Evans and Chris Godwin. He was also hampered by Tampa’s abject lack of a running game, which meant Evans, Godwin, and everyone else were stuck running through a crowded secondary that didn’t have to worry about the Buccaneers’ run game.

There’s a lot of value in a quarterback capable of throwing deep against defenses who expect it, especially in a league that trends more toward college-style spread offenses each year. If you’re looking for a player who can stretch defenses vertically at an almost-reckless rate (more on that later), you could do much worse than Winston — he’s focused on creating big plays.

He’s also sturdy near the goal line. His interception rate inside the red zone was a scant 1.4 percent and helped contribute to a 99.0 passer rating inside an opponent’s 20-yard line. He had a 76.0 passer rating and a 5.2 percent INT rate anywhere else on the field.

There’s even a silver lining to his recent struggles as well. A quarterback only gets to 30 interceptions if he’s got a certain green light from his head coach. Winston absolutely got that from Bruce Arians; in 2019, he threw for an NFL-high 5,109 yards while averaging 8.2 yards per attempt. There was enough in his play that convinced Arians to accept the bad as a package deal with his good.

Those are impressive numbers in a vacuum. That’s what makes Winston an intriguing high-risk quarterback. But it’s been impossible to separate Winston from his defects.


We know all about the turnovers at this point. Some can be explained.

There are a few instances where Winston’s interception issues aren’t his fault. Maybe he’s the victim of a tip-drill pick. Maybe he throws up a desperation heave downfield on third-and-long while trailing late in a game. Maybe O.J. Howard drops a pass so thoroughly all a linebacker has to do is scoop it off the tight end’s back.

These moments are all understandable ... and they’re a minority among Winston’s lowlight reel.

The cantilever to his penchant for big plays is a single-track mind that always defaults back to a target he had settled on already. There are times when Winston drops back in a clean pocket, stares down one wideout for three seconds, then throws into double-coverage anyway.

Sometimes his brain and arm don’t quite align and he throws the ball directly to a player wearing the wrong jersey. Behold, a rookie mistake from a fifth-year quarterback:

A little pressure can force Winston into bad decisions, but he makes the correct read in interception to Richard Sherman above. He just flubs this pass so badly an out-of-position Sherman barely has to move to bring home an easy touchdown. And, somehow, it wasn’t even the most cringe-inducing pick-six of that game:

What’s worse is how many of these miscues were so immediately damaging. While he was solid in the red zone, his decision-making broke down deep in his own territory. Seven of Winston’s 2019 interceptions were pick-sixes. Five of those were returned only 32 yards or fewer to the end zone.

This is what you sign up for when you lock into the Jameis Winston experience. His confidence in his arm gives him the freedom to make monster throws, but it also gets him into trouble.

There’s no official stat for it, but I’m sure no player in the league throws more passes off his back foot in hopes of muscling a ball into tight windows than Winston. Even when he appears to understand the coverage he’s facing decides “f—- it” and launches the ball anyway.

These are all correctable mistakes, but five years and three head coaches couldn’t fix them in Tampa. The Buccaneers hoped pairing Winston with a head coach known for reviving veteran quarterbacks would help him realize his potential. Arians did that — it’s just that Winston’s potential was as the NFL’s first-ever 30-30 season.

The case for: why not both?


Winston is a big mess of a quarterback, and we haven’t even gotten into his off-field issues (of which there are many). At his peak, he’s able to move the ball downfield with an explosiveness few quarterbacks can match. In his valleys, he’s a mistake-prone pick-six machine who tries to do too much and winds up digging his own grace. There’s value in him because he’s a dynamic deep-range quarterback, but he sabotages his own play by throwing deep too often and in bad situations.

Would a lesser receiving corps force him out of his bad habits because he knows he can’t blindly trust they’ll bail him out? Maybe — but if a 30-interception season wasn’t the wake-up call he needed to make adjustments and change his approach, there’s a chance nothing is.

Still, the most likely scenario is that Winston remains a quarterback who lives on the extremes. Winston’s happy place would pair him with a top-flight receiving corps and an offensive line talented enough to withstand blitzes and keep him from panicking in the pocket. Get him that and buttress him with an overachieving defense, and he could exceed the standard set in Tampa.
Click to expand...